October 24, 2022
Boston, Massachusetts flight to Halifax, Nova Scotia
JTH Steps 9,517
Up real early, 4:45 am to get to Logan Airport. We were not sure how passing through immigration would be but it went smoothly. Found out passports are no longer stamped...total bummer. A slight mix up with renting the car, it was in downtown Halifax at the Westin Hotel, thirty minutes in the opposite direction we needed to be going. A $120 Uber ride later we had our car and were off. Oh well, another adventure. Next stop Point du Chêne, New Brunswick after a stop at Tim Horton's for lunch. We were so hungry and this was the first place we saw. I do have to say there cookies were great but not as great as my friend Renee's. Let's just say I will take McDonald's over Tim Horton.
The drive from Nova Scotia to Point du Chêne, New Brunswick was about three and a half hours. Most of the drive was on the Trans-Canada highway NB-104. Not much to see but green pine trees along the highway. Maple trees were spotted between the pines and starting to turn red. Such a wonderful site to see green trees and green grass. I was beginning to think they only existed in my dreams. 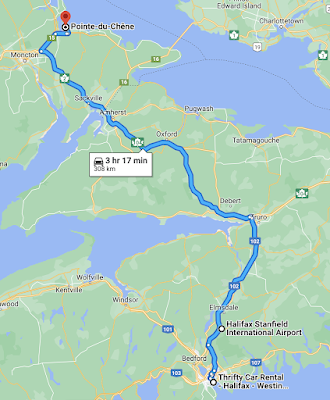 Made it to Pointe-du-Chêne and found our cottage. Pam the owner had told us we would get the keys from Derek, Barry's cousin, but she decided to wait for us because a former renter had a cat and they sprayed in one of the bedrooms. She managed to remove the smell but wanted to make sure we didn't smell any residue. We didn't and told her not to worry. If we did we would just open the windows. She also owns the house next door and would be there through tomorrow if we had any concerns. She said they renovated it a few years ago for her kids and grandkids but they don't come so she rents it out. A few instructions, keys in our hands and she went back to her house next door. We unpacked the car, decided on a bedroom, it has 3 and walked down to Derek and Hayley's cottage. 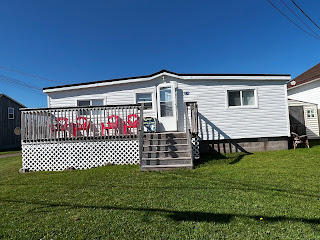 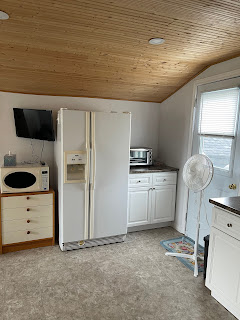 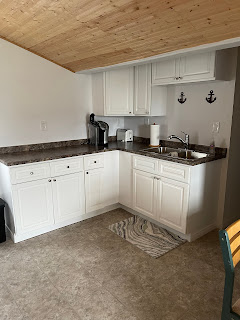 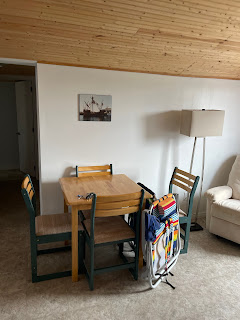 0
This is the first time Barry is going to meet most of his cousins in person, actually touch them instead of a zoom call. We received HUGE HUGS by Derek and Hayley. Derek is Barry's cousin and Hayley his wife. I have met most of his cousins on zoom and we are facebook friends but seeing and touching is so much better. They made us feel right at home. We got a tour of their cottage, they took us down to the beach and then went up to their upper deck to sit and enjoy a glass of wine. They call the upper deck the Fishbowl. Their was constant chatter the entire time. Questions asked and answered.
The beach...amazing! The sand is white. The water is shallow and because of this there are sand bars that pop up. You can walk out about two or three hundred yards and the water is only waist deep. Weird to see how far out the sand bars go and people way out there playing on the beach. See pictures below. The water seems cool but not as cold as the water at Santa Cruz this time of year. 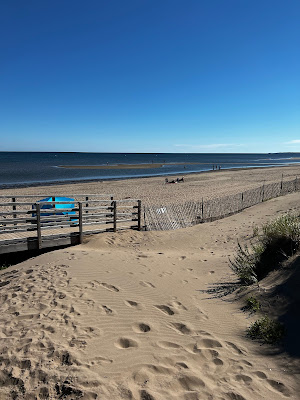 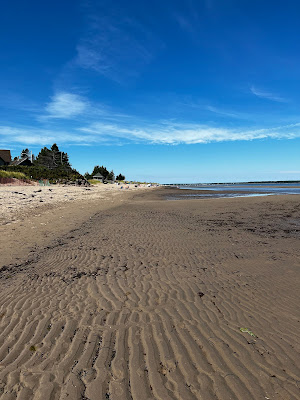 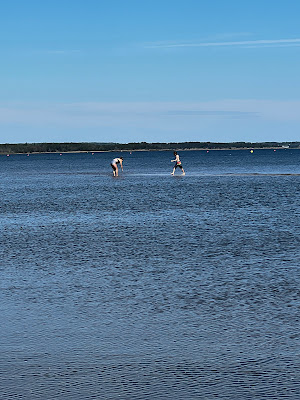 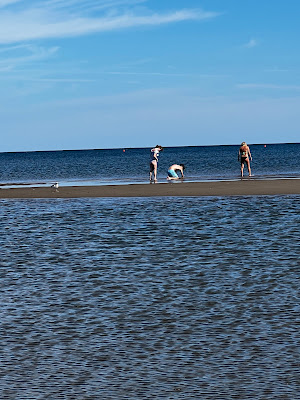 There are seagulls but not as many as our California coastal beaches AND they walk close by you. They are not afraid of humans. It was entertaining watching the toddlers try to catch them. We observed Hermit Crabs in the shallow water. Kids were making sand castles with water moats and putting the sand crabs in them. It was great to see how they left the crabs alone and didn't do anything with them but put them in the castle moats. As we walked along the water I picked up a few to look at them more closely. Fascinating creatures. They can really tuck themselves far back into their shells. I picked up ones that were as small as the tip of my little finger to the size of a fifty cent piece. 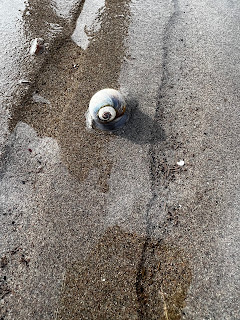 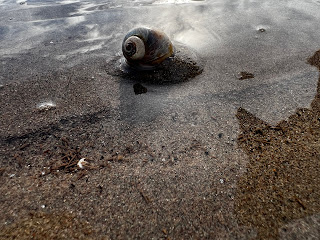 Susie, another cousin and Derek's sister, texted and said dinner was at 6:30 pm. Susie, her husband Glen, daughter Sara, Sara's partner David and their four month old daughter Emma are staying at the Henderson Cottage. Got that....LOL! We walked over to the Henderson Cottage and we were welcomed with open arms. HUGE HUGS again all around. Glenn BBQ'd salmon, and there was a green salad, couscous, and asparagus for dinner. We ate on the back deck and the weather was perfect. It was so nice to have a home cooked meal. Again, chatter never stopped as we all got to know each other more. Dessert was pie from a local bakery and delish.
After dessert we played a card game called Oh Hell. How to play was explained since we have never played the game or heard of it before. After about two hands we got the hang of the game. It's a fun game and even Barry enjoyed it. He says he doesn't like many card games but he had fun. I think just being we were with his family made it more enjoyable. We didn't get back to our cottage until midnight. A little tired because we were on a 4 hour time difference in New Brunswick and Boston is a 3 hour difference. Before we left, Susie gave us a bag of genealogy stuff to review. It was a lot of stuff so we will have to spend one day going through it and taking pictures. We walked back to our cottages with Derek and Hayley so we wouldn't get lost.
Such an awesome day and it was so heartwarming to see Barry with his family. Other than his sons, he doesn't have any blood family in the states.
Copyright © 2022 by Jacqueline Threet Henderson, Jacqueline's Jaunets. All rights reserved.

Popular posts from this blog

October 08, 2021
My grandparents always grew Kentucky Wonder green beans in the summer. I asked my Grandma one spring if I grew the same beans would she teach me how to can them. Of course, she agreed so I planted lots of Kentucky Wonder green beans. At harvest time we made a date and spent a day canning beans. She walked me through every step. She also told me of a few times the pressure built up and the pot lid would pop off and beans would be everywhere, even on the ceiling. I had heard these stories and I became a bit worried, but she assured me it would not happen. I still was not convinced and kept my eye on the pot. We ended up canning thirty jars that day and I have that wonderful memory of standing at my Grandma’s stove with her. I joined the 52 Ancestors in 52 Weeks group with Amy Johnson Crow. I've had a hard time keeping up with this but strive to do better. Wish me luck.  Copyright © 2021 by Jacqueline Threet Henderson, Jacqueline's Jaunts. All rights reserved.
2 comments
Read more

Ghosts, Spirits, and an Ouija Board

November 11, 2022
Ouija Board  My younger cousin Danny frequently reminds me of the time we were in our backyard in San Jose, California playing with my Ouija Board. There were four of us, Danny, David (brothers), me, and my siblings Teresa and Billy. We were sitting on the ground of our concrete patio being very serious and trying to conjure up ghosts and spirits.  Danny always insists I was trying to raise our swing set using the Ouija Board. He would imitate me talking to the Ouija Board and laughing at me. He loves to tell this story and how I failed to raise our swing set. At one point my father sneaks around and jumps at us and scared us to death. We all must of jumped 3 feet in the air and screamed! To this day he makes fun of me for believing in ghosts and spirits and I remind him of how high he jumped when my dad scared us.  Written for Amy Johnson Crow's 52 Ancestors in 52 Weeks Blog posted on Facebook.com under Generations Cafe.  Copyright © 2022 by Jacqueline Threet Henderson, Jacqu
Post a Comment
Read more

September 05, 2022
Boston, Massachusetts Freedom  Trail Tour JTH Steps 19,760 Getting up this morning was difficult but we did it. Showers felt good and rejuvenating. Downstairs for  breakfast. Busy restaurant. You could tell it was the working crowd. The majority of the people looked like they were all in their thirties....or we are getting old. We both agreed we do not miss working. It was fascinating to watch the interactions. Called for an Uber and headed to Boston Commons. We went into the Visitor Center and asked where the Robert Gould Shaw memorial is. We were to meet our tour guide there. We headed up a slight incline, past a bunch of purple flags to the top of the hill. The flags were in memory of the amount of people who have died of opioid overdoses in Boston. When you see the amount of flags it hits your heart.  Small Purple Flags on the Boston Common. Each flag represents a person. Robert Shaw Memorial Found shade by the Robert Shaw memorial to wait for our tour guide. Read the words on the
1 comment
Read more 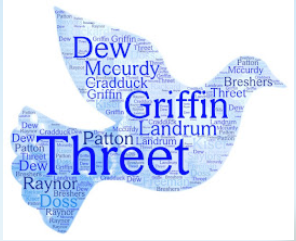